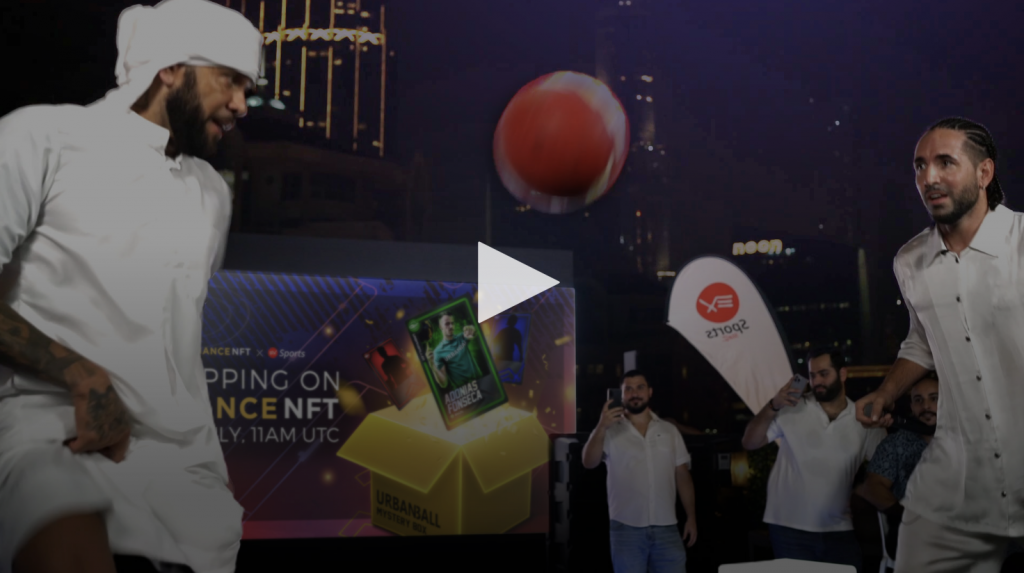 An Evening of Football, NFTs, and Crypto Games

What a night for the sports fans who got to meet the biggest names in the business! NFTs are not just changing the world of finance and digital gaming, but also helping fans connect with sporting superstars. With many pro-athletes diving head first into Crypto and NFTs, Sean Garnier is the first street footballer to co-create innovative NFTs with Dubai-based sports fan engagement platform, EX Sports. These NFTs can be used in Urbanball games and are currently traded on Binance NFT, the largest centralized NFT marketplace in the world.

After the success of their first NFT drop in May, EX Sports had the second drop of 10,000 NFTs on June 24th, exclusively on Binance NFT. The collection is sold out and included 10 ultra-rare ‘Sean Garnier Diamond Edition’ NFTs, which among other exclusive rewards, gave the NFT owners the opportunity to meet the legendary Dani Alves along with Sean Garnier in Dubai. Owners of the 10 rare NFTs from the first drop got to meet superstar Brazilian footballer, Neymar, in Qatar.

Dani Alves is the most decorated footballer in history, the prolific defender boasts over 43 trophies. Footballers do not come bigger than Dani Alves, who is the epitome of supreme athleticism. Sean Garnier’s NFT partnership with EX Sports makes meet and greets with such star footballers possible for football fans. Garnier is the 2x world freestyle football champion and has over 19 million social media followers and over two billion video views. He has teamed up with EX Sports to give real-life athletes increased exposure, empower lesser known players and inspire football fans across the globe.

The Rise of NFT Gaming

While we thought that NFTs were revolutionizing art, what they really did was transform the gaming industry. Sports fans are twice as likely to buy NFTs and 57% of households with an avid sports fan have owned digital assets. NFTs have become a game-changer (pun intended). They have literally redefined what gaming is.

Metaverse games such as Urbanball have tokenized in-game assets like characters, consumables, or other tradeable items. Even an avatar could be an NFT, and with decentralized blockchain technology to back it up, these NFTs have real-world value. Urbanball is a blockchain-based street football mobile game in which players collect and use NFT character cards and skill cards to compete.

EX Sports and Sean Garnier have discovered street football to be the niche that will merge the worlds of sports, digital assets, and gaming. The Urbanball NFTs are an iconic piece in sporting, gaming, and crypto history. Owning them gives you the chance to meet your favorite sports players and you can use them to play Urbanball, the world’s first play-to-earn street football mobile game.

About Urbanball
Urbanball is a comprehensive street football ecosystem, comprised of a play to earn game, NFT collectables, 1v1 ‘fightball’ tournaments, micro-events, e-commerce and talent management, all of which are interconnected. There are over 10 athletes signed to the brand, including former and current world Panna and Freestyle football champions, who combined have over 30 million social media followers.

About EX Sports
EX Sports is a full circle fan engagement platform centered on an NFT Marketplace, Live Streaming, Gaming and E-Commerce. A core mission is to promote athletes in ‘niche’ sports, such as; Muay Thai, Ju Jitsu, Powerlifting and Street Football, who have huge fan bases but can often be overlooked in comparison to the likes of Premiership players, NFL pros and NBA athletes, who are currently lining their pockets in the new and lucrative world of NFTs and digital collectibles. EX Sports is fighting for these ‘underdogs’.

About MetaTerrace
The first ever lounge-restaurant that merges the digital and physical world, in line with the principle of a #Metaverse. Created by Dubai-based crypto consultancy, ColossalBit, MetaTerrace offers a DIFC-based hub for Dubai’s blockchain community, along with nightlife enthusiasts alike.